Our release of the ColorPerfect plug-in for Adobe Photoshop rendered GamSat 1.0 mostly obsolete

GamSat 1.0 is a plug-in for Adobe Photoshop that was used to change the Gamma, saturation and / or hue of an image. Our release of the ColorPerfect plug-in for Adobe Photoshop as the successor of our original ColorNeg and ColorPos plug-ins rendered GamSat mostly obsolete, too. GamSat is still available as an unlimited 30 day trial version and can be permanently activated with any ColorPerfect license key.

Saturation and Hue adjustments in general

Both Saturation and Hue adjustments will inevitably lead to a departure from true color integrity to one degree or another. Due to this fact these adjustments should always be performed last when working on an image. Preceding them you should utilize functions like those within ColorNeg and ColorPos that fully maintain color integrity. Many images will not require any adjustment beyond what can be accomplished by those means.

For RGB images Photoshop uses the HLS color space to calculate the results of its Hue / Saturation command. HLS stands for hue, lightness and saturation. This sounds appropriate but in fact HLS is only an artificial alternative representation of RGB that does not take human perception or overall intensities into account at all. This is where the problem with Photoshop's Hue / Saturation command is founded.

The lightness component of HLS is neither equal to the perceptual luminance of a color nor to its overall intensity. Two colors with an identical HLS lightness value are likely to be perceived as colors of different luminance by the human eye. This is so even if the two colors only differ in HLS saturation. 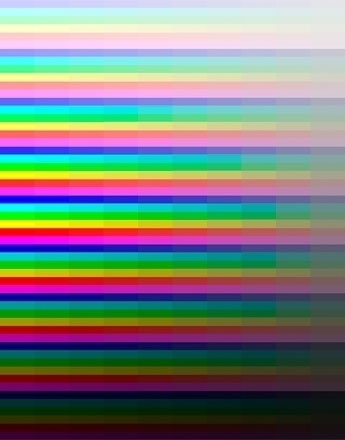 We have prepared an illustration made from 9 groups of identically colored rows to show this. Each group consists of the six primary and secondary colors blue, cyan, green, yellow, red and magenta. All rows within a group share the same HLS lightness value. Each row consists of 10 color patches of the same HLS hue and lightness that gradually become less saturated to the right. You will perceive the blue row of each group to be darkest and its yellow row to be lightest. On top of that there are obvious luminance differences between the color patches of any single row.

Imagine for a second what a grayscale of this image would look like. Reducing the saturation of the image all the way to 0 should effectively create what you have envisioned. This is what GamSat would do. Photoshop does something entirely different.

Since all values of a group share identical HLS lightness values the result of desaturating the image in Photoshop will just be 9 gray bars. The artificial HLS lightness component used here is no more than the sum of the minimum and maximum among the three RGB values multiplied with a scaling factor.

Let's go back to the color rows produced by gradually desaturating the colors to the left in Photoshop. No single row is of perceptually even luminance. If we had used GamSat to do the saturation adjustments in the process of creating the rows the 10 saturation steps on each row would barely be visible. If we use the Hue / Saturation command to desaturate these rows of even luminance we will again not get a proper grayscale. Photoshop's version shows an intense stair step effect that does not resemble the even rows of the input file at all. GamSat will produce just what you would expect when desaturating the image.

The above examples of utter desaturation are intended to clarify the problems in Photoshop. Naturally the same problems apply to any amount of saturation change applied with the Hue / Saturation command. GamSat will always outperform Hue / Saturation in RGB mode since any change in saturation should leave both the perceived luminance of an image and the hues of the colors the image contains untouched. Such a well performed adjustment will only depart from true color integrity in so far as that the resulting image will be more saturated than it would have been otherwise.

Please note that GamSat's saturation adjustment allows pixels to exceed the maximum value in one or more color channels when increasing saturation. After completing the adjustment it will no longer be discernible by which amount those maximum values have been exceeded. If any values have been driven to their respective maximum during an adjustment this will not be reversible. It is therefore recommended to retain a backup copy of your image before applying Saturation or Hue adjustments.

Since any hue adjustment will actually change an image's colors, departure from color integrity is inevitable. The resulting image will naturally no longer be a representation of the depicted scene that is as natural as possible. You might ask why we provide a hue adjustment in GamSat at all since it opposes the concept of color integrity by nature. The answer to this question is that color integrity is not meant as a dogma. What we aim for is that when you depart from it you do so by choice rather than by accident. Hue is intended as an artistic tool only. If you feel that you want to depart from a natural representation of your scene by using hue as an effect for artistic reasons please do so.

Hue in GamSat and Hue in Photoshop

We mainly included the Hue function because Photoshop's hue adjustment in the Hue / Saturation dialogue will affect an image's lightness in the same undesirable way as the respective saturation adjustment does. When changing the hue of the original color rows by an extreme 180 degrees in Photoshop these lightness changes can be observed well. The blue rows will become the yellow rows which means that the darkest tone of each group will become the lightest and vice versa. In addition to this each of the new rows will be less even in luminance than the original. The new yellow rows will contain darker tones towards the less saturated side of the image while the new blue rows will contain lighter ones and so on. The effect will become even more visible when taking the well behaved rows produced with GamSat and applying the same adjustment in Photoshop. Opposed to this GamSat's Hue function will keep the image's lightness as close to its original value as technically possible.

As such adjustments are no longer within the domain of color integrity there might well be cases where you simply like one adjustment better than the other. We have provided the image of a stained glass window in its original color and 11 hue variants to compare both effects. The window variants are hue shifts produced with GamSat. They range the whole way from -180 to 150 degrees in 30 degree steps. The original window is the first in the third row and is equal to 0 degrees of change. The same adjustments in Photoshop have been ordered to match. They range from 180 to -150 degrees. The variants produced in GamSat are more even in lightness while Photoshop's variants produce areas of differing lightness and increased saturation. Which tool will best suit your needs will depend on what you want to do.