Some scans of color negatives show noticeable and unwanted noise in their darkest parts or in saturated colors and since they do we often get asked whether that is some kind of scanner noise and sometimes why multi sampling does not eliminate it then.

The latter often is because of a misunderstanding from the positive film world. In scanning slides any noise in the darkest regions of the film likely has been introduced by the scanning process itself and usually can be eliminated by the use of multi sampling settings in the scanner software.

For slides there is very little light to sense in these darkest areas which lets the device's intrinsic noise level become a factor. Since such noise is arbitrary and does not occur in the same spots between several scan iterations it can be removed by suitable calculations. For color negatives however what becomes the darkest part of the positive image really is the brightest part as far as the scanner is concerned and that is not prone to device noise issues to begin with. Also it really is the most detailed part of the whole scan due to the linear nature of the scanner sensor's operation. 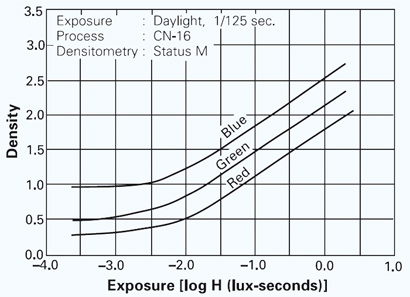 Usually the film's base plays a larger part than some might expect. Looking at a color negative film's characteristic curves (Fuji Reala) we can see that before the curves begin to rise steadily there is a tail region for each curve where over the width of one or several EV (1EV = 0.3 log Exp.) things start slowly and at first do not even rise much above the density of the base granularity of the film. The difference in density between the three color channels is because of the color filters that form the orange mask and which get cancelled out during the inversion but the red channel's base density gives us a rough impression of how large the base granularity might be for all three primaries. What is denoted as red, green, blue here refers to the final positive image so it's cyan, magenta and yellow for the actual negative. 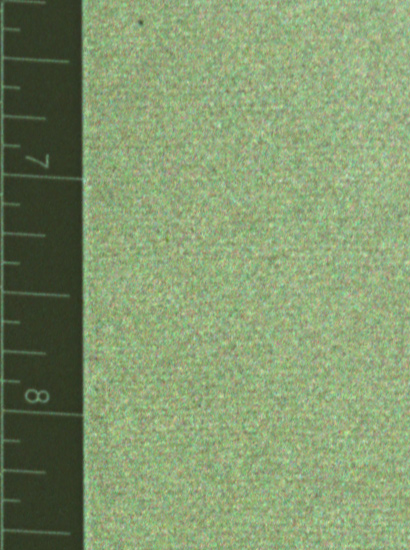 To illustrate the base granularity issue I'm not going to use a converted negative at all but will rather use an unprocessed portion of two linear scans produced with multi sampling and suitable analog gain settings. This is about negative film in general and not about ColorPerfect or ColorNeg in particular. The crops shown here are taken at 100% magnification from scans of two 35mm negatives scanned at 4,000 dpi. The setup of the shots is an identical studio situation. The only difference is that for the second image the flash's output has been doubled so that that negative has had a single EV more in terms of exposure. The first negative already is what one would probably call well exposed but let's look at its brightest parts - that is what will become the darkest in a positive image.

The darkest element of the scene is a piece of matte black cloth. In this first image we can barely guess its texture. If we add one EV worth of light however the cloth's fabric becomes much better defined. It now falls considerably above the density of the film's base and thus above the base noise level. Compare the two shots by alternating between them a couple of times to see the difference. They have not been sharpened or anything and you'll note that the bright text of the scale is close to identical in sharpness for either image. You can also enlarge the images.

The same applies to all saturated colors. For a color to be saturated at least one other color has to be missing. Thus at least one primary will be very dark in the final positive - or bright and therefore close to the film's base granularity in the negative. Let's look at what is the rendition of a bright red color patch in the scene on the same negative. If we expose one EV more the change in terms of noise on the negative is quite noticeable again.

The above often is the reason for noise in a negative conversion's dark regions or saturated colors which can't be cured by scanner settings. It could be remedied by more suitable exposure settings but usually that is a moot point since the film has been exposed already, sometimes a long time ago. So if this really is an issue you'll probably want to explore specialized de-noising applications.

Multi sampling often is useful for scanning color negatives. It's about the darkest regions of the negative which do contain much of the mid and bright tones of the scene. Noise occurring in those will often be remedied by multi sampling and so their general level of detail can be improved that way.