Salt and pepper grain in negative and slide scans

What I'll refer to as salt grain in the following for negative scans is equal to what is often referred to as pepper grain for slide scans. The effects are the same and only occur for certain film types or maybe even batches of film when scanned on certain scanners. The first deciding factor on whether the effect shows appears to be the presence of tiny bubbles of air which can be trapped between the film's base and emulsion during manufacturing. The other factor is the nature of the scanner's light source.

The first factor is pretty much set in concrete and one can do little about it. Of course one can avoid problematic film types in the future or write to manufacturers but for existing negatives neither is going to be very helpful. The second factor varies from scanner to scanner and apart from using a different scanner for problem films it might even be possible to do something about it for certain scanners.

One rather extreme case of this effect for which I was even sent one negative in question to test with myself was a roll of 35mm Fuji Reala negative film originally scanned on a Nikon Coolscan LS-5000 ED. We'll look at some crops taken at 100% from scans of this negative at 4,000 dpi. You can also further enlarge these images (expand the crop) by clicking on them. 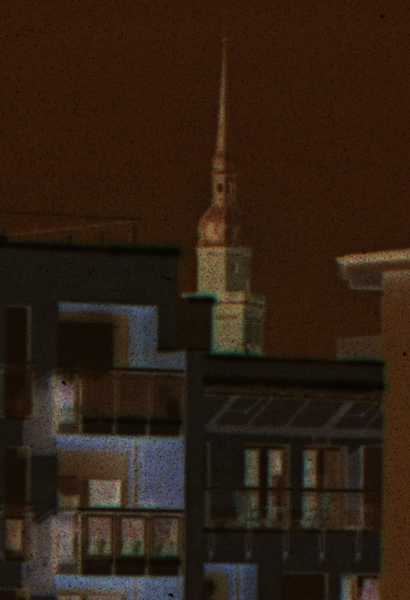 To the right you see a crop from the linear scan of the negative produced on the LS-5000. This scan has been made at a multi sampling setting of 16 eliminating all noise that could theoretically occur due to the scanners electronics. The crop shown is pretty dark because the targeted RGB working space has already been assigned to the still linear data. If we used a display method matching the linear data we could already see the distortions that will become the salt grain in the final positive. They are the same little black speckles we would see on a slide having the pepper grain problem.

So let's revert back to the original linear scan and invert it using all default settings and the built in Fuji Reala characterization of ColorPerfect's ColorNeg mode. Now we can see our foe for the first time. This is the salt grain that can be a problem with certain scanners. An interesting thing to note is that this salt grain will be remedied by the use of infrared cleaning technologies such as digital ICE, SilverFast's iSRD or VueScan's infrared cleaning. That is so because the distortions in scanners that suffer from this problem are also present with light from an infrared light source.

Because of the magnitude of the distortions using such technologies as a solution can introduce artifacts and distortions of its own as can be seen on this crop from a simple scan which has also been made on the Nikon Coolscan LS-5000 ED but this time without multi sampling etc. but with Nikon Scan's digital ICE feature turned on and set to fine. Much of the salt grain is gone now but at 100% magnification we do notice obvious detriments to the image's sharpness and distortions on geometric elements like vertical lines.

It turns out that the Coolscan LS-5000 has a hard directional light source. The benefit of such a design is an increase in sharpness. Nikon's medium format scanners Coolscan LS-8000 and Coolscan LS-9000 seem to have a much more diffuse light source in order of addressing exactly this problem. We have scanned the negative at hand using either and there was no noticeable salt grain effect at all. On this page the scans from the LS-8000 will be used. Since I get asked about it: That scanner has a 14 bit a/d converter which is sufficient, too. There are other unpleasant issues with it but those are avoidable and are detailed on the Nikon Scan tutorial page.

Looking at the same crop from a scan without ICE on the LS-8000 we notice that the salt grain does not occur. The white speckles that remain really are dust and can be removed by turning on digital ICE again. This time there are no distortions of the nature we saw before either. The reason for the distortions due to digital ICE we saw previously will become obvious if we compare the actual image data sensed by the infrared sensor of either scanner.

We can write it to file using VueScan's 64 bit RGBI output if we like. I have but a 2,000 dpi scan from the LS-5000 with such data so we'll view this at half the resolution we used before. The infrared data from the LS-5000 is incredibly noisy while the data from the LS-8000 is not. The difference in the grayscale portions is irrelevant as that will be discarded. It is just a matter of the right threshold being used by the cleaning algorithm. Only the really really dark elements will be used in the cleaning. On the LS-8000's scan that is actual dust and scratches and on our salt grained LS-5000 scan it is that plus thousands and thousands of tiny bubbles of air. The LS-8000's and LS-9000's light source design leads to somewhat less crisp results than the LS-5000's but that can be treated with a bit of digital sharpening if such is even needed at the final positive's target resolution. Also the cleaned crop from the LS-8000 shown before and sharpened here was made using digital ICE's fine mode. We have found that using normal mode often performs better for situations without any extreme things to be cleaned.

What can be done about salt and pepper grain occurring in scans on my scanner?

The problem with the tiny bubbles of air paired with directional lighting is that all light is deflected by such a bubble in roughly the same way leaving a spot that is not being penetrated by any light at all. The light of a diffuse light source would hit the bubbles at various angles and so the effect does not occur.

For scanners that have this problem it has been reported that wet mounting can help in avoiding the problem but we never got involved with that and do not have any experience to share in that field. The factor that might really make a difference with it is the refraction of the light when hitting the mounting fluid I think.

There also is a company from the Netherlands selling diffuser glasses to equip to certain existing scanners. Their product has also been reported to solve this issue for certain scanners.

We know that for negatives the problem can occur with rolls of Fuji Reala on Nikon's Coolscan V and LS-5000. We have also found that it occurs on our Minolta Multi Pro using the example image shown here but to a significantly lesser degree than in the above. It does not occur for Nikon's Coolscan LS-8000 and LS-9000. If you are experiencing this it would be aprechiated if you let us know with which scanner and film type you do. Simply use our above contact form link. I'd also be very interested in whether anyone of you actually uses either of the two possible solutions mentioned.

We'd like to thank Roger Smith who to our knowledge was first to describe the bubbles of air being part of this problem for slides (in April 2002) and who actually visualized them for all of us that don't have microscopes at hand in this article over at luminous landscape. His text and images are on the bottom of the page linked to. It starts with the headline "Blowing Bubbles".